Presentation of Achievement Shields at 2018 AGM

AGM was held on Wednesday 21st March at Otterbourne Village Hall and the following presentations were made by the Chairman.

Based on points  from competitions in 2017 the winners were.

Rally Shield – Joint Winners – Sue Garner and Anna/David Moxon and Disney both with 29 points – presenting to each other!

Performance Shield – is decided on points in other disciplines other than obedience. Yvonne Burchell and Baxter 122 points. 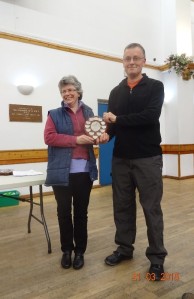 Finally, Barhi Trophy (for Achievement) – This is down to trainers the recognising achievement for which there were two strong contenders. The first Sue Kenny and Siri but by unanimous decision the winner was Bex Ford and her whippet Monty, having achieved success at both Rally and Obedience during 2017

Well done to all the winners and a big thank you to those that submitted points but were not recipients of shields.